Coastal golf clubs from around the South West peninsula are clubbing together to support the National Trail which links them up and makes them so popular.

Thurlestone Golf Club, prominently located in the protected South Devon Area of Outstanding Natural Beauty, has played host to the Association’s Annual Golf Fundraiser every year since 2014. Thurlestone’s ongoing support of the Trail on their doorstep has now inspired fellow clubs, who likewise benefit from their location on our region’s unique coastline, to join forces with them and support the charity’s fundraiser. 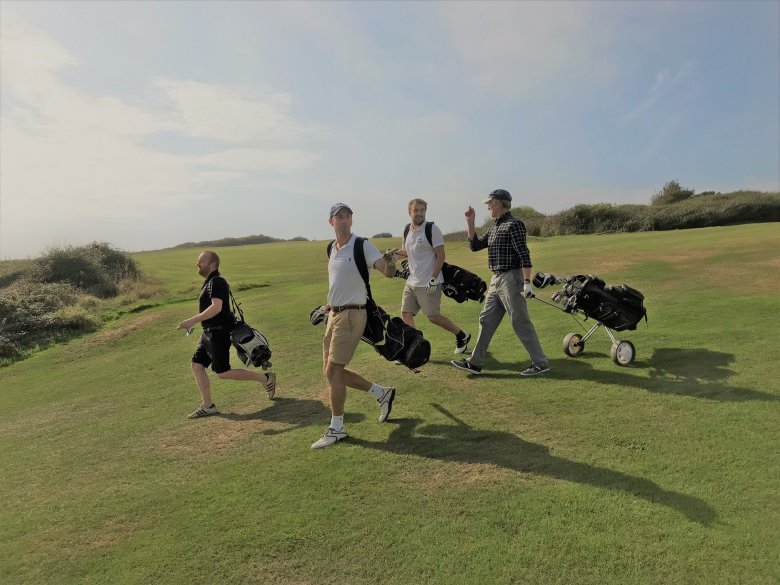 Simon Bawden, General Manager said “We believe that Thurlestone Golf Club’s location on the Coast Path in South Devon is unparalleled in its beauty, so we are only too happy to do our bit for the charity that looks after the Trail and coastal corridor. We know that it is the combined prospect of enjoying world-class walking and superb golf that draws many of the visitors to Thurlestone, which is why we choose to support this event’.”

Bill Lawrence, South West Coast Path Association volunteer and long-time member of Thurlestone Golf Club said “it means a great deal to me that my local golf club, which I have been associated with for 60 years supports the charity that I volunteer with through this annual fundraiser. You can’t underestimate the value of the Trail’s pulling power to somewhere like Thurlestone, so I am glad that my club recognises that”.

There are still places available for both pairs and fours in the South West Coast Path Association’s Golf Fundraiser, sponsored by Bush & Co Accountants. Thanks to the Association’s supporters, prizes include rounds of golf at iconic South West clubs, including a top prize of a stay for two at the Polurrian Hotel with a round at Mullion Golf Club. Bookings must be made before 25th September. Details and registration form are online at southwestcoastpath.org.uk/events/golf/.

The Association would like to say a big thank you to all the golf clubs that are supporting the day and look forward to welcoming the players in 2 weeks time!

Big shout out to @nickbutterrun who is currently running on the #SWCP at the start of his monumental challenge to run the whole coast of Britain in 100 days. That’s the equivalent of running two marathons every day for 100 days!!! Show him some love people! 🙌 👏👏👏 #RunBritain #Britain #worldrecord #200marathonsin100days #southwestcoastpath
WOWEE! Thanks to your remarkable generosity, we are thrilled to announce that we’ve just *exceeded* the £100,000 fundraising target for the first year of our ‘Every Mile Matters’ campaign 🎉🥳🙌💚💙💛
28th APRIL - 10-11.15
Fancy being part of the biggest and most impactful clean up event ever!⁣
Friday vibes ✌🏼✨
Check out @sianannalewis ‘s latest adventure on the #southwestcoastpath exploring our newest itinerary The Serpentine Coast on The Lizard, Cornwall. Thanks to the National Trails promo team for support in making this happen! 🙌🏼

Stay up to date