Skip to content
Hurry Krishna, who writes a travel blog called 'An Indian on the way' has been in touch to tell us about her experience walking one of the world's greatest trails, the South West Coast Path.

Our nomad’s life — a different bed each night — came to an end at Lulworth Cove, where the earth holds a bit of the ocean in a perfectly circular embrace. We had four more relatively short walking days left on the South West Coast Path (SWCP). But with no accommodation available along our track, and having found a B&B in Corfe Castle whose lovely owner was willing to ferry us us to and from the Path, we resolved to do the final sections as day walks.

We had started in Minehead. We have not set a record for speed! High wind and rain forced us to abandon the last two kilometres into Looe and again the last five into West Bay. Hating the feel of sealed roads underfoot, we cut out walks in and out of the big cities, Plymouth and Torquay. So I guess we don’t qualify for the End-to-End certificate either. But every bit of the Path has brought its own enchantment. 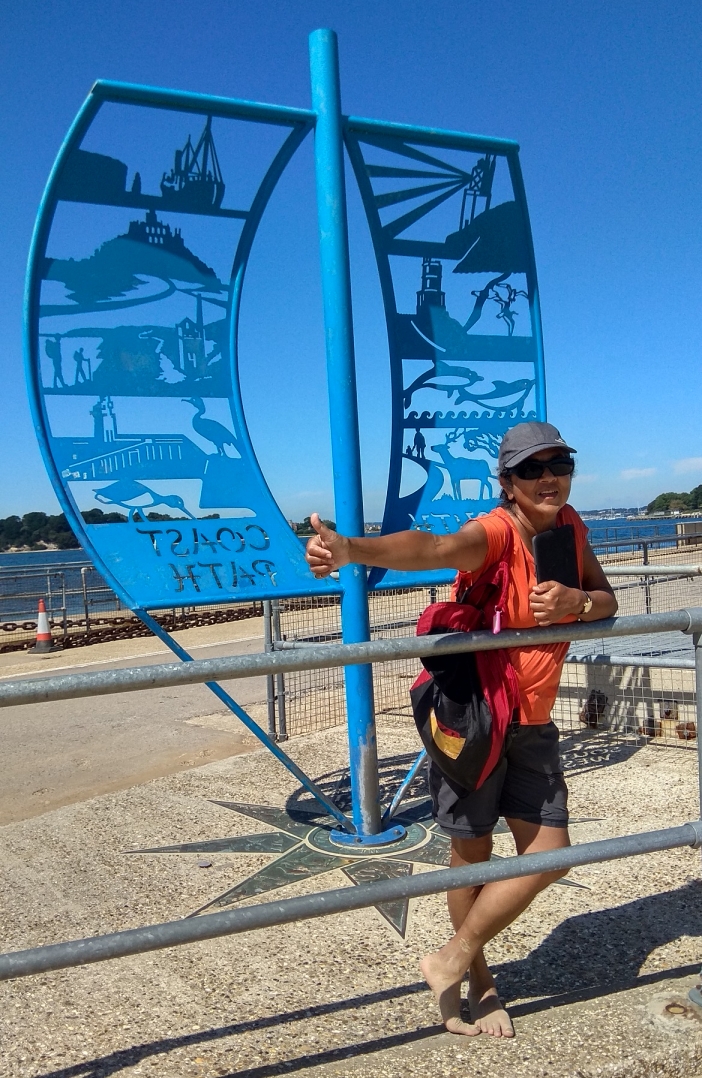 In the Exmoor National Park we were surrounded by birdcall in the tree-lined forest paths. In North Devon, the easy flat river bank walking took me back to childhood books, Toad Hall and Tarka the Otter. Through North Cornwall, the  Path soars and swoops along the high cliffs above the Atlantic Ocean and down to the sandy beaches, again and again, until you reach Land’s End. Then, as the track turns first south and then east, there is a subtle change in the terrain: the south coast is just a little less craggy. The hills get greener and rounder still as we reach South Devon. Later the dramatic rocks of the Jurassic coast, red, gold and white, rise in straight walls from pebbly beaches below. This land is fragile as it is beautiful.

My Indian eyes seek out ancient sculptural shapes in the vast panorama: here a temple rising from the deep, there an elephant head sucking the English Channel into its gigantic trunk!

My Walking Buddy and I are veterans of many walks including the 1,400 km Camino from Le Puy to Santiago just last year. Still, we have been absolutely blown away by the diverse topography of the South West Coast Path.

There are tourists galore from the world over where the SWCP passes well-known beach towns like St Ives or special attractions like Durdle Door (no, not an ancient temple dedicated to the god of elephants!).

Surprisingly, however, the Path seems to draw very few international walkers. On the more popular routes to Santiago there are hundreds of Koreans, dozens of Japanese and a smattering of walkers from a range of Asian and African origins. Whereas here, on the SWCP, in 7 weeks we have seen not one long-distance walker from anywhere other than UK and a few from its nearby European neighbours.

The SWCP has to be one of the great long-distance trails of the world! So, where on earth are all the world’s hikers?

Stay up to date